The ALT Fundamental Data Records  (FDR) are taking into account the improvements made in the frame of the REAPER project and the ENVISAT reprocessing 3.0. 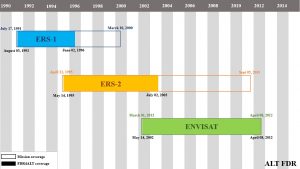 In the frame of the FDR4ALT project, new algorithms and flags have been added, and corrections were applied to the already existing data. This is detailed in the section below.

This a a real added-value as it provides non only information about the waveform shape (correlated to the surface), but also an uncertainty associated to the waveform with the classification confidence rate.

The waveform class is a direct input of the Adaptive retracker used on ENVISAT echoes in the frame of this project.

To help the user read the data, two variables have been added in the product :

Calibrations information is now directly available in the product in dedicated NetCDF groups. For ENVISAT, the product contain the new averaged PTR as used in the Adaptive retracker. By averaging directly the I and Q, the new PTR is much more closer to the ideal synthetic PTR and the secondary lobes are visible. By averaging the I2Q2 (green), an artificial noise is obtained, hiding secondary lobes information. This new averaging was a key aspect to apply the Adaptive on ENVISAT echoes.

Two aspects of the REAPER products have been corrected in the FDR4ALT products :

As explained in the REAPER product hanbook :

“Time tags are not guaranteed to be monotonic and increasing, i.e there may be overlapping ranges of time between files, outliers and forwards and backwards time jumps. The overlap is generally between a few seconds and half a minute. […] Time tags not only reverse but can also jump forward and then back to normal. [..] Particularly affected is ERS-1 cycle 150, where nearly every pass has a few time tags out of sync. The cause of this issue is corruption in the on-board binary counter”

A dedicated algorithm was developped to detect and edit the impacted points. In general, this corresponds to approximately ~1% of the overall data

In the ERS REAPER products, there is a numerical overflow of the field ku_wf that contains the Ku-band waveform: when an unsigned short (16 bits) is coded as a signed short (15 bits + 1 bit for the sign), the values greater than 2^15 are interpreted as negative values and the heavyweight bit, that worth 2^15 (32768) is ignored.​

This issue happens quite rarely on ocean, but can up to 10% of the leads, so it was important to correct it for sea-ice applications.

This induces incorrect negative waveforms, that were corrected in the FDR4ALT products using a dedicated formula.