The diagrams below display the FDR4ALT future product time coverage for the MWR Fundamental Data Records (FDR) . This is a preliminary version and can evolve along the life of the project. 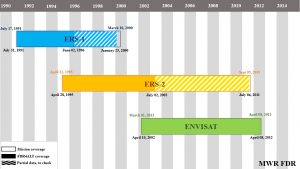 The sky horn receives contributions sky but also from the earth and from the SAR antenna within this solid angle (aperture of 40°).

In FDR4ALT reprocessing, we chose to use the Tcold table used for REAPER. It was divided by ERS-1 acc/ah0 coefficients to retrieve the original table, and the prototype was updated to perform the multiplication inside the code according to each mission characterization file.

For both ERS missions, the physical temperature of the reflector (Tp) us not measured, hence the reflector loss is not considered in the radiometric model. This correction can impact of 3 to 6K the antenna temperature retrieval, depending on the value of reflector transmission (nref) chosen.

To provide a table of Tp temperature, one day of S3A reflector temperatures was separated by ascending and descending passes, averaged by 5° bins of latitude than and scaled to be within the 288+-13K   temperature range of ERS (ref doc). The reflector loss correction is then applied on TA by selecting the appropriate Tp corresponding to the measurements latitude.

The sidelobe correction is used to compute TB from antenna temperature. It can be written as a combination of contributors emitting in the antenna field of view. A portion of the antenna measurement is contaminated by cold sky, satellite, SAR antenna emission as well as earth emission in the side-lobes.